Rangers of Oblivion's Guide to Horses

The land of Malheim houses a variety of horses, which can be caught and made into your trusted companion. In addition to being your mount, horses also grant you with extra stat bonuses. They can even reduce your damage taken from a certain type of behemoth, a stat which cannot be gotten elsewhere. A great horse can carry you like the wind, as well as grant you important bonuses in battle.

Stats include the following:

Damage Reduction - Grants damage reduction against a certain type of behemoth. Either against Giants, Mutants or Dragons.

Elemental Resistance - Grants the player with a type of elemental resistance. Either Fire, Frost, Lightning or Poison.

Dispatches - Adding a horse to your dispatches grants a certain buff. 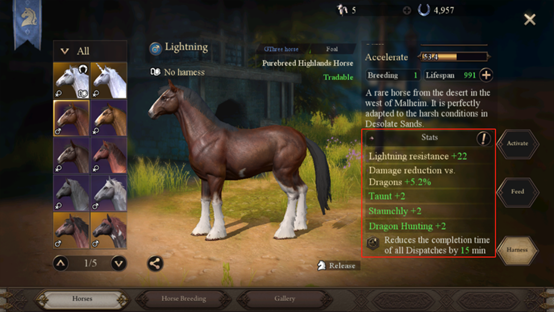 The rangers have arranged Malheim's horses into six different grades. Horses of the first three grades can be caught in the wild, but horses of grade four or higher have to be bred by the player.

Lineage - Malheim's horses are divided into three different lineages: Highlands, Flatlands, and Polar. Highlands horses are red in color, flatlands black and polar white. When bred, these three types of lineages will be inherited by the foal.

Maturity - Growing up, horses will pass through five different stages of maturity: Foal, Yearling, Colt/Filly, Prime, and Mature. A horse's basic stats (Speed, Turn Speed, and Acceleration) increase as it matures. A horse's maturity can be increased by feeding it, or by simply letting time pass by. PS: Only horses of the Colt/Filly maturity stage and up can be used for breeding. 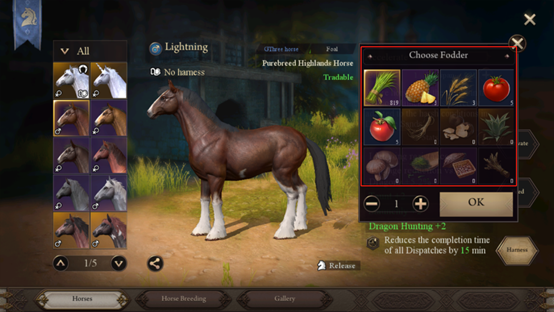 Breed Attempts - When a horse is born, it will be given a certain number of breed attempts (normally 1-2), and one attempt is lost each time it breeds. This stat cannot be recovered in any way.

Lifespan - A horse's lifespan continues to decrease as time passes by. A newborn foal starts with an initial lifespan of 1,000, and horses caught in the wild tend to begin with less than 1,000. A horse's lifespan can be increased with Ghost Pipes (1,000/ghost pipe). These can be bought at the Mall, the Market or be exchanged for Lucky Horseshoes. PS: Lucky Horseshoes can be obtained by releasing horses.

Horses of grade four or higher can only be acquired via breeding. So, how does breeding work and how do you choose which horse to use? Let us shed some light for our Rangers here.

Firstly, breeding requires a stallion and a mare, and both horses have to be of Colt/Filly maturity or higher and have remaining breeding attempts. Each breeding costs a Silver Laurel, which can be gathered in the wild, bought from in the Mall or Market, or exchanged from Lucky Horseshoes.

The foal's stats will be decided by its parents' stats. If two pure-polar breed horses breed, then their foal will most likely also be a pure breed. A foal from half-breed parents may become either a half breed or a pure breed. PS: If you are aiming to obtain a certain lineage, it is recommended to use pure breeds for breeding.

The foal's rarity, that being its grade, is decided by its parents' grade and maturity. Currently, the easiest way to breed a high-grade foal, is to use parents with a high grade and a high maturity stage.

Basic Stats - A horse's basic stats, Speed, Turn Speed, and Acceleration, are decided by its breed and lineage. Horses of a higher breed have more stats than their counterparts, and a horse's lineage dictates the allocation of these stats: polar horses are quicker, highlands horses accelerate faster, and flatlands horses make quicker turns.

Behemoth Damage Reduction - This stat is decided by a horse's lineage. Polar horses grant damage resistance against Mutants, highlands against Giants, and flatlands against Dragons. Half breeds will inherit one of the two at random.

Special Skills - A foal's special skills are inherited at random from its parents, but the power of them are dictated by its breed. If both parents have the same special skill, then the foal will inherit it.

Horses you have no use for can be released, which will grant you with Lucky Horseshoes in return. These can then be exchanged for various horse-related items at Marlowe's Shop. 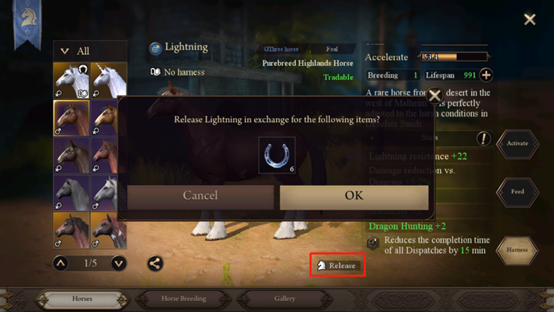 Whenever a pure breed of grade six is born, there is a chance it transforms into a fantasy breed. These are the most sought-after and quickest horses upon the land of Malheim. Good luck! I hope that all you rangers out there will acquire a fantasy breed horse of your own! 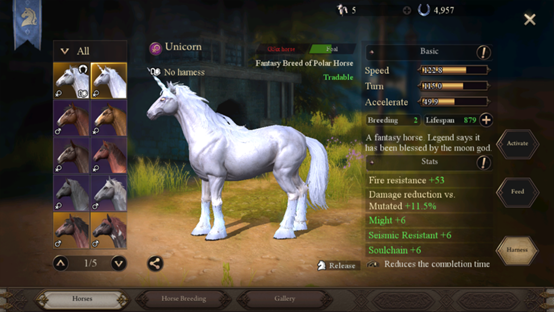 Harnesses are divided into four different rarities: Normal, Superior, Rare, and Legendary. Harnesses of a higher rarity grant higher Speed, Turn Speed, and Acceleration bonuses. Equipping your horse with a legendary harness changes its appearance and makes it feel as if you're flying ahead!

There are currently two ways to acquire legendary harnesses:

(1) Heading to the Seer for a divination which has a legendary harness in the prize pool.

(2) Obtain it from the Hunter's Moon Celebration's final bundle.